If You Have Enough Fast, Anything Is Possible

How Disney built a modern cloud with open source. As the session description aptly put it, “in this massively heterogeneous world, interoperability is key.”

Chris and his team worked over the last 18 months to reboot the delivery and consumption of technology services at Disney. He is no doubt a Superuser in the best possible sense of the word, and his journey is worth retelling for this month’s column.

A few years ago, the relationship between those providing technology and those consuming technology at Disney was difficult. This is a common conundrum. The tension between “making stuff cheap” and “giving people what they really need” is acute.

Disney eventually resolved this tension with the following insight. “Fast” is, in the end, the most important trait of all.

And as Chris so eloquently put it, “if you have enough fast, you can make your own cheap. If you have fast, you can iterate to the best quality.” I thought that was perfect.

Everyone these days is competing against startups, Superusers most of all. We are all in the innovation business now, as I’ve written before. Bigger organizations almost universally recognize today their need to think like a startup, act like a startup, recruit like a startup, and so forth.

Chris drew laughs when he admitted that as the guy running Disney’s online data center, he was the guy you love to hate. Teams would come to him talking about needs for “tomorrow”. Chris’s inevitable retort demanded better planning, and greater anticipation. If you had just come to us earlier…

And that, in turn, meant not just “building a cloud” but doing things from end-to-end in a cloud-like way — automating deployments for example, and producing intelligent, flexible infrastructure that anyone could manage.

Chris and Disney did run into two major roadblocks along the way, which are worth noting here because they’re good learning cases for everyone. After speaking to each, I’ll finish this post with Chris’ big insight about How We Did It™.

As much as we would all love our apps to be cloud-ready, that’s not realistic, Chris reminded the crowd. For some people and for some lines of business, the uptime of a single instance is extraordinarily important, and that’s not merely an issue of “legacy” versus “modern.”

You might be able to handle that single instance’s workload with a different architecture, but it’s important not to discount the care with which those functions must be upgraded. On this point specifically, Chris paid OpenStack a compliment, which was great to hear.

The second potential stumbling block that Chris highlighted revolved around the need to figure out a clean, deliberate, aligned strategy for dealing with technical debt.

As he put it so well, you can save up and pay off all your technical debt at once, or you can make minimum monthly payments. That is, you can build things in parallel and make a big swap, or you can integrate capabilities and move things over incrementally.

One is not necessarily better than the other, for what it’s worth. But I do want to affirm Chris’s overall point. Deciding exactly how you’re going to pay off your technical debt is as important a conversation as you can have when you’re transforming how you do business.

So how did Chris and his team pull it off?

An array of smaller insights were discussed, but for me there was one especially non-obvious takeaway. Specifically, I found it fascinating how closely the language and vocabulary that Chris used mirrored that of startup culture.

Chris, for example, emphasized how important “early adopter customers” are. These “customers” — even though Disney’s notion of a “customer” (whether internal or external) is so markedly different than any startup — were the most important levers Chris and his team pulled on, not unlike seed-stage ventures.

Chris’s team read, reacted, and responded to the people who showed up and were most excited about their new project. And as he noted, first customers are both your best and your worst ones. They will be the most vocal, but they will also tell what you really have.

It’s one thing to displace waterfall for agile in your heart (and mind). It’s quite another to be clever enough to recreate the requisite circumstances for an agile culture inside of a Fortune 500 company. But that’s what Chris did.

Even though Chris and his team work at a large corporation, they nonetheless managed to emphasize “early partnerships” with functions that appreciated the collaboration and in turn evangelized Disney’s cloud throughout the organization and beyond.

And that leaves me with this closing point.

Certainly enterprise IT often does a poor job “marketing” itself, both internally and externally. Chris’ success highlighted the usefulness of thinking of your infrastructure service as a product that a company could or would be marketing, and likewise as a product that is accountable to a public that will make or break you.

Not only did such a mentality change the team’s mindset, but it ensured that change spread horizontally, on merit and word-of-mouth.

If you believe the original insight, that fast matters most and that every organization is competing with a startup, whether they like it or not, the process of being and becoming a Superuser is about having the courage to expose your project to market-like dynamics, no matter your context.

As we’ve seen time and time again, it can be done. Kudos to Chris, and Disney. And thanks for an awesome presentation. 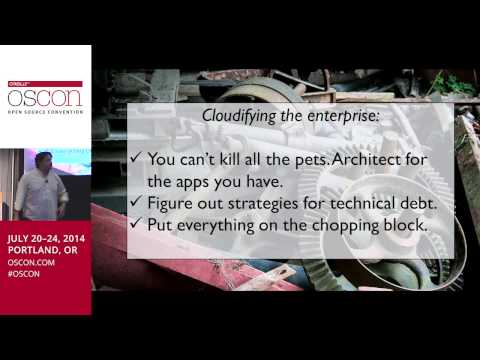